The performative video embodies in its choreography and visual aesthetics NEW DAWN’s conception of an organic and speculative future. The body arises and shimmers to create a linguistic animacy effect that produces a transformation on the gloves’ nature. The performed garment acquires its own identity and agency through the act of stage representation. Following the notions of desire, animacy and sentience, the actant character of NEW DAWN’s garments activates a person’s conscience of themselves and their surroundings, suggesting moods and atmospheres. Produced and directed by acte tm, with choreography by Franka Marlene Foth, sound by Ozelot Studio and creative direction by Tobias Faisst. 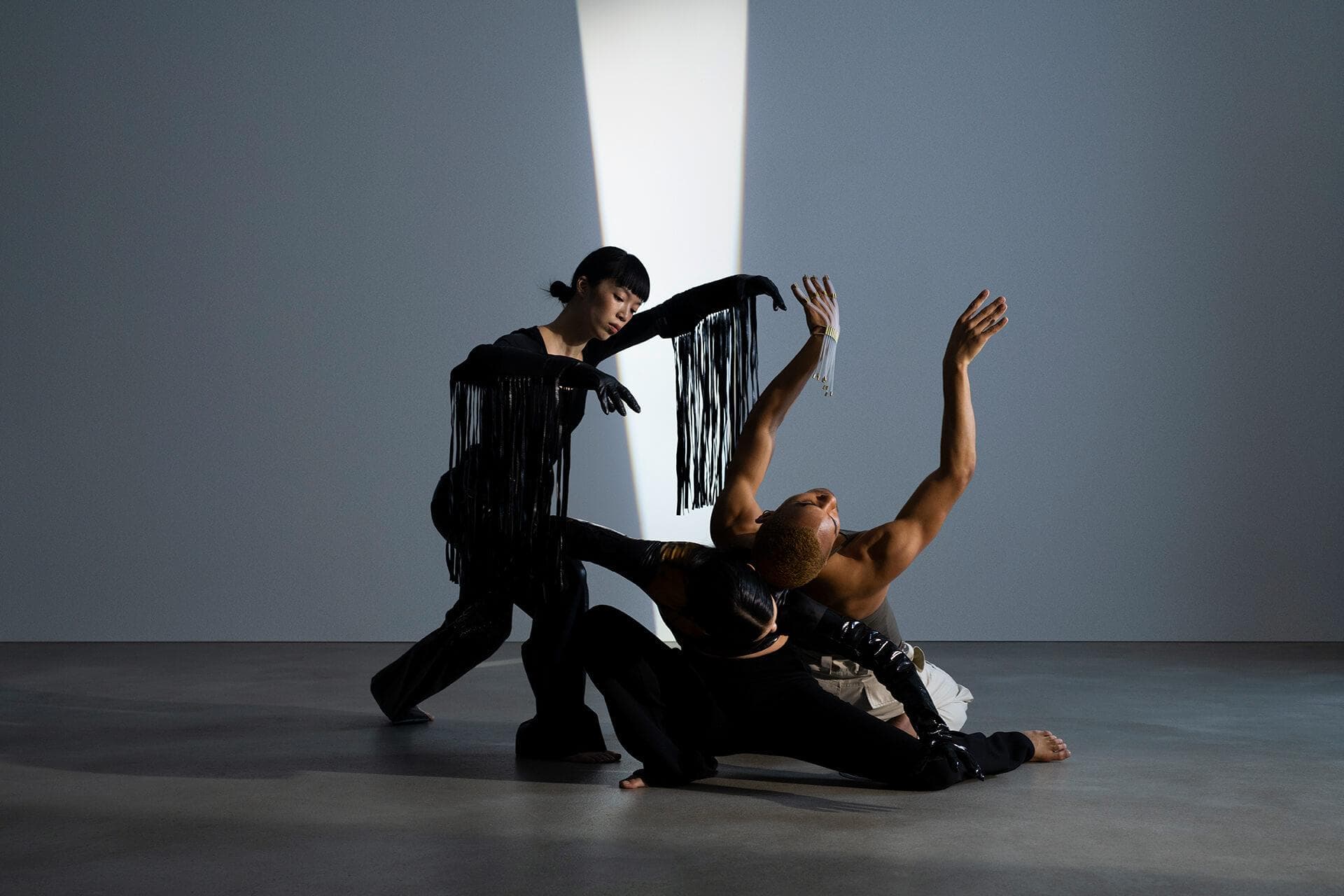 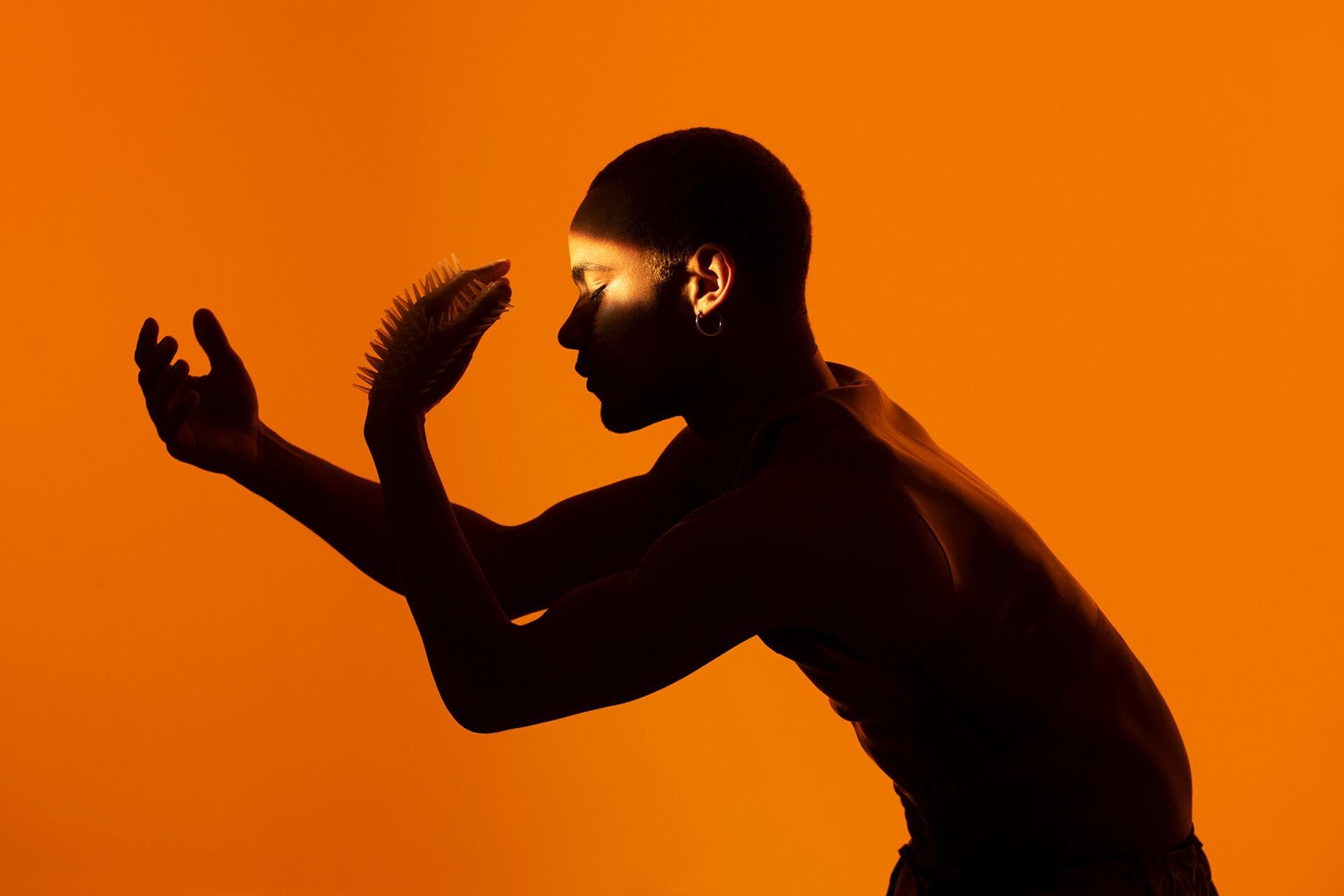 CGI (Computer Generated Imagery) & Photography merged together foster the idea of an emancipated aesthetics where organic and synthetic realms enhance human experiences. Each and one of these photographs is the result of a process of communication and cooperative work. The gloves were initially chosen according to four categories: fashion, health, production and science. Once photographed by Tobias Faisst and post produced by Studio Wolfram, the 17 different models were sent to 17 artists, including four additional custom made gloves produced exclusively for NEW DAWN by Johanna Gauder, Mate Steinforth, Loki Dolor, David Bizer and Caroline Hauff, pieces that display a range of artistry, technique and performative interpretation. The artists were given a glove according to their artistic aesthetics, and as a conceptual reference, a speculative scenario based on an organic future where animate and inanimate objects transform the human body and its surroundings, allowing the consecution of new ecologies in symbiosis-generated processes.
Shock Absorber Glove 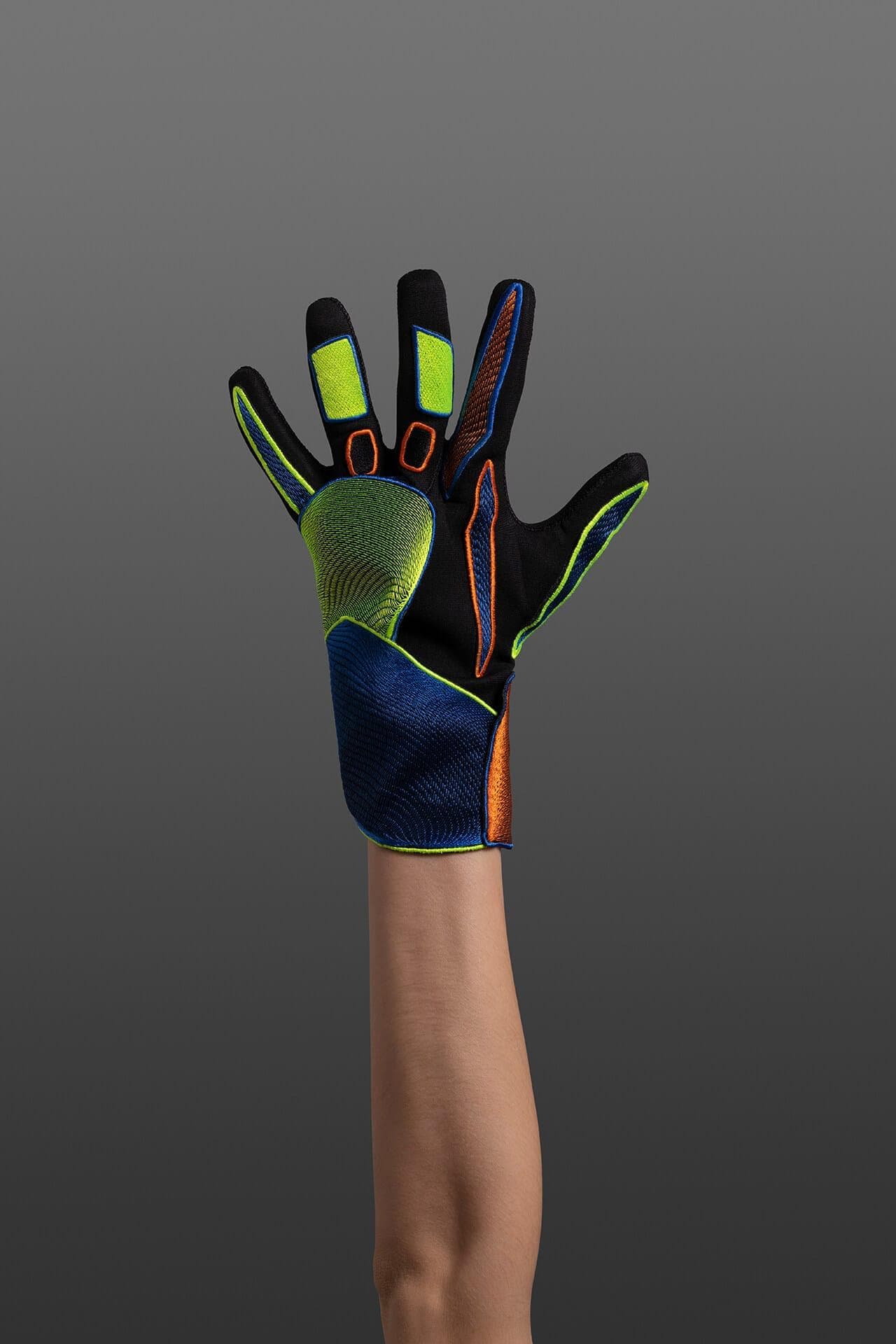 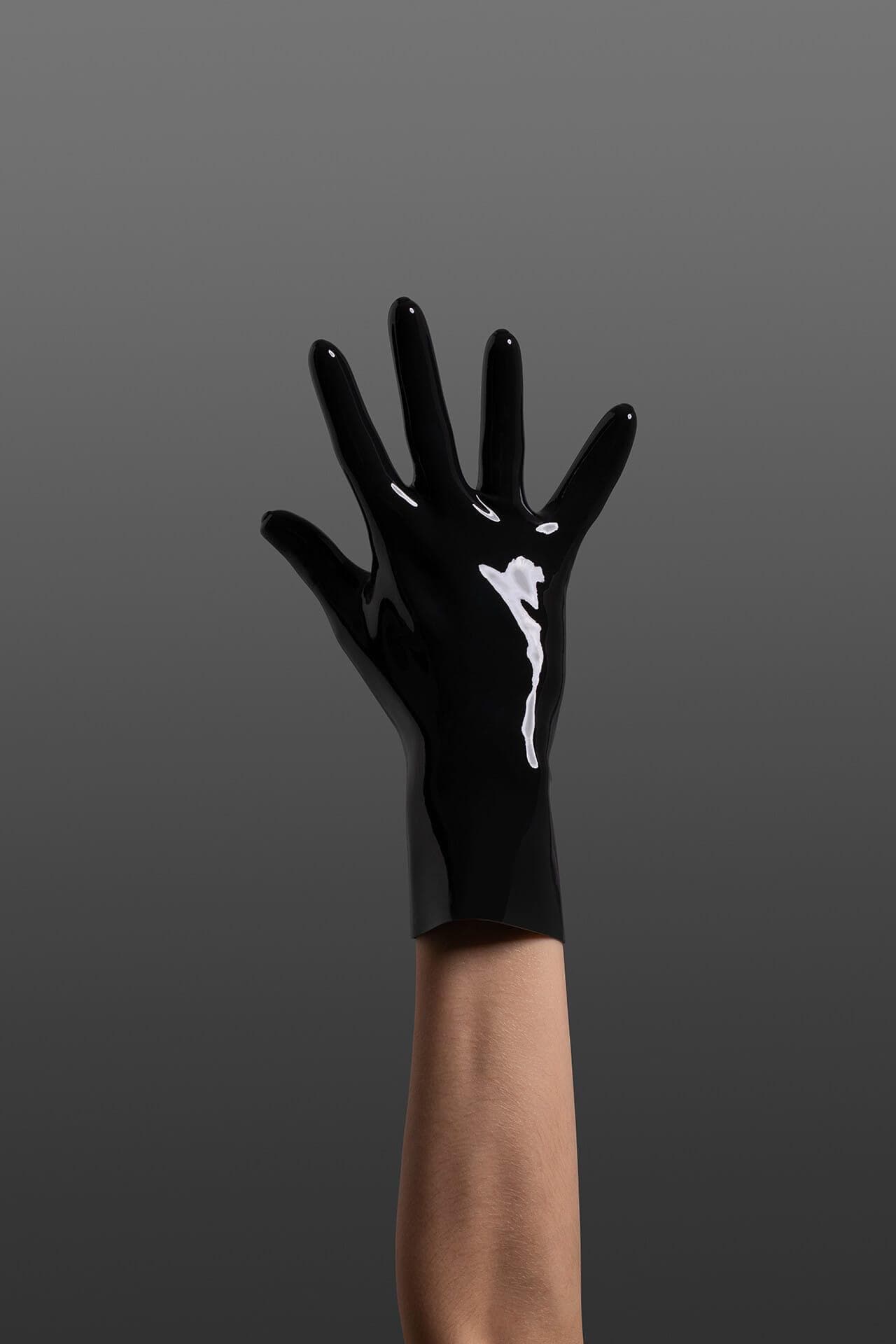 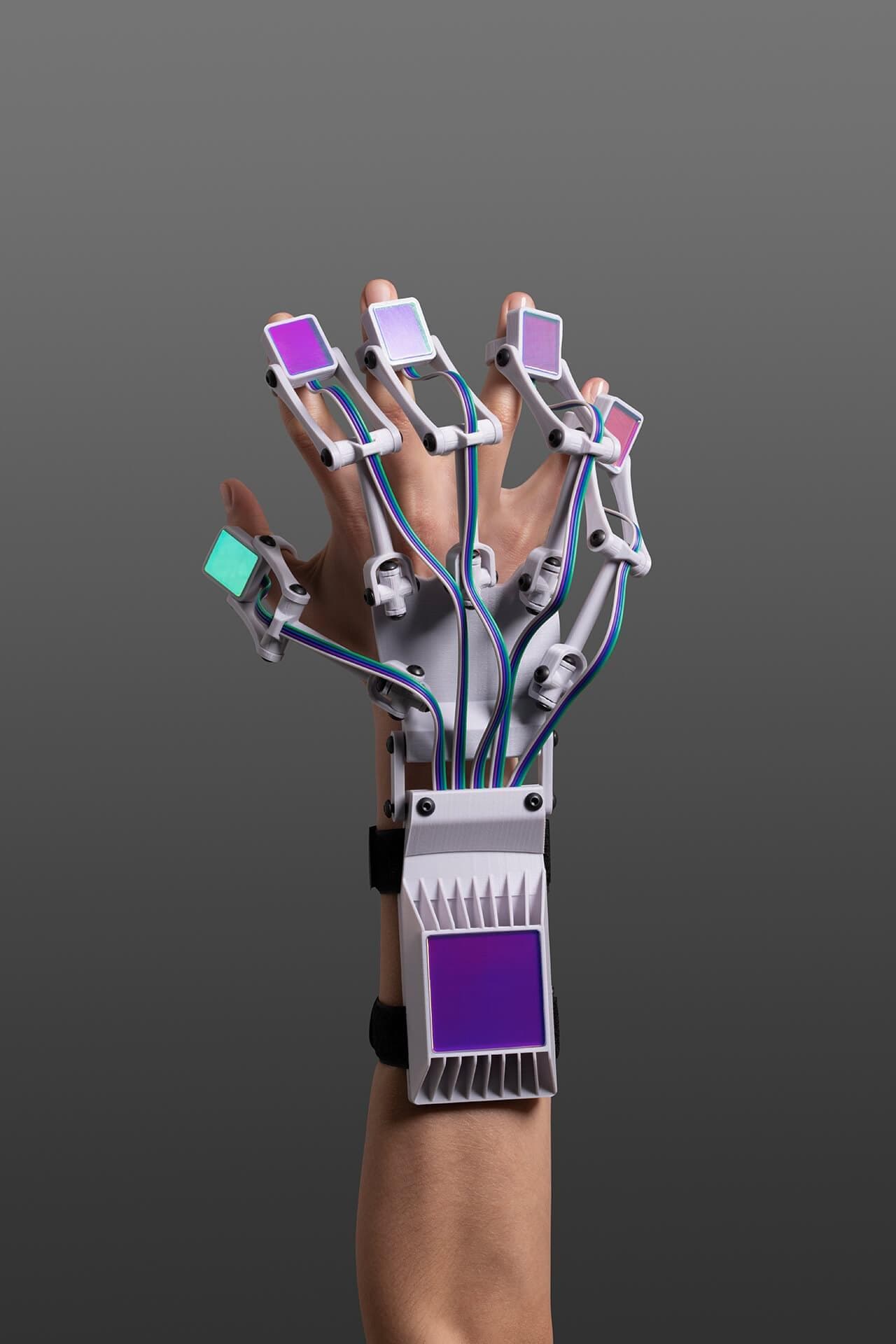 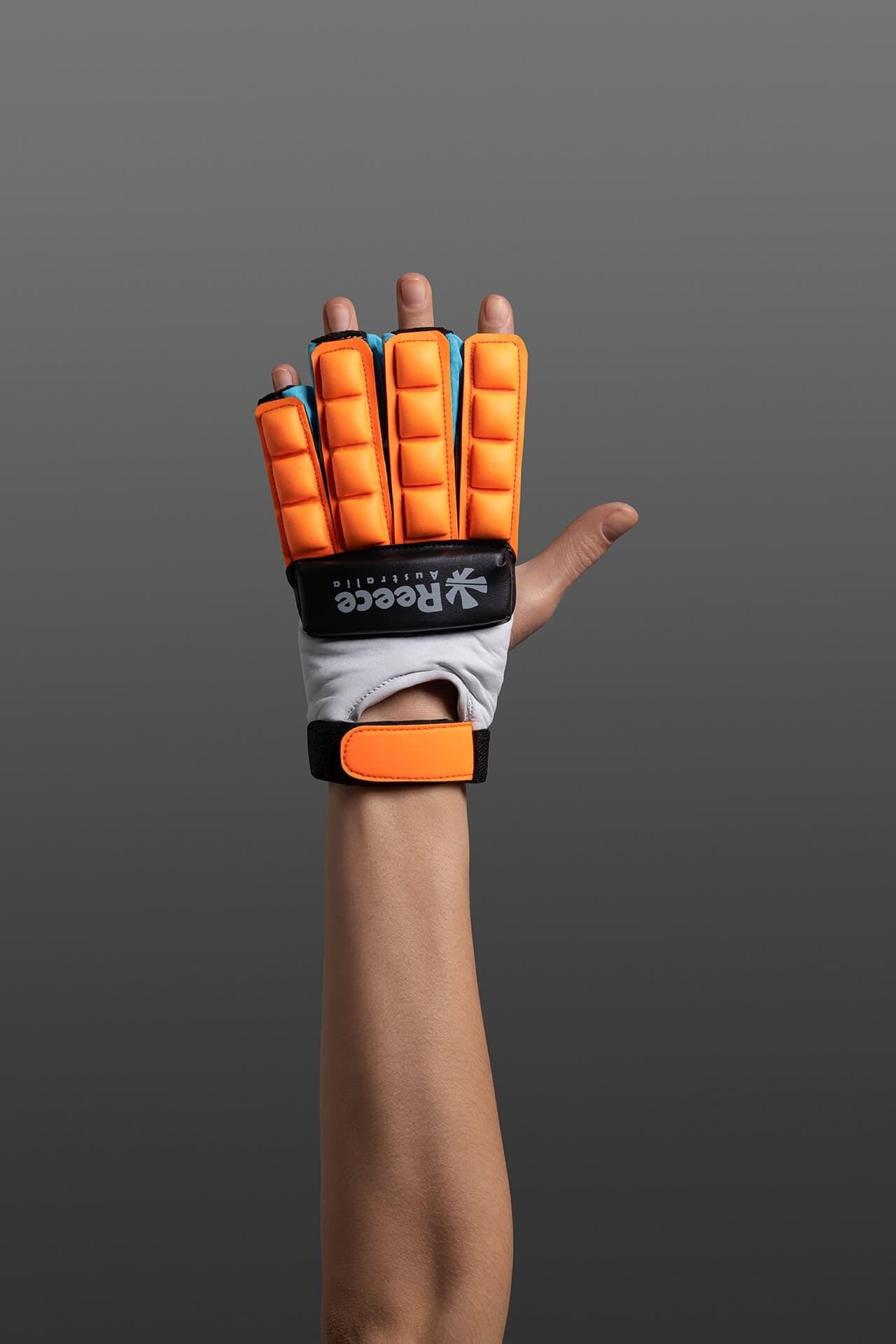 The CGI animations are created and directed by Dean Giffin with music production by Iven Jansen. Their sober character is a projection of NEW DAWN’s aesthetics: A field of expansion and transformation. It reflects the performative and cross-genre ideals of a speculative and organic future, where new tools enable new creations.

The installation foresees the convergence between the physical and virtual realms into a new conception of hyperreality where the recognition and awareness of an enhanced experience is possible. Based on generative design, the artwork portraits the transformation of the medium to exists as an immersive experience where soundscapes composed by un.studios strengthen the NEW DAWN of human perception.

Johanna Burai conceived the logo and the futuristic brand of NEW DAWN. Its sleek, solemn and organic aesthetic is interpreted by nine of our favourite graphic designers, who have expanded its aesthetic and graphic universe , exploring multiple and speculative languages. 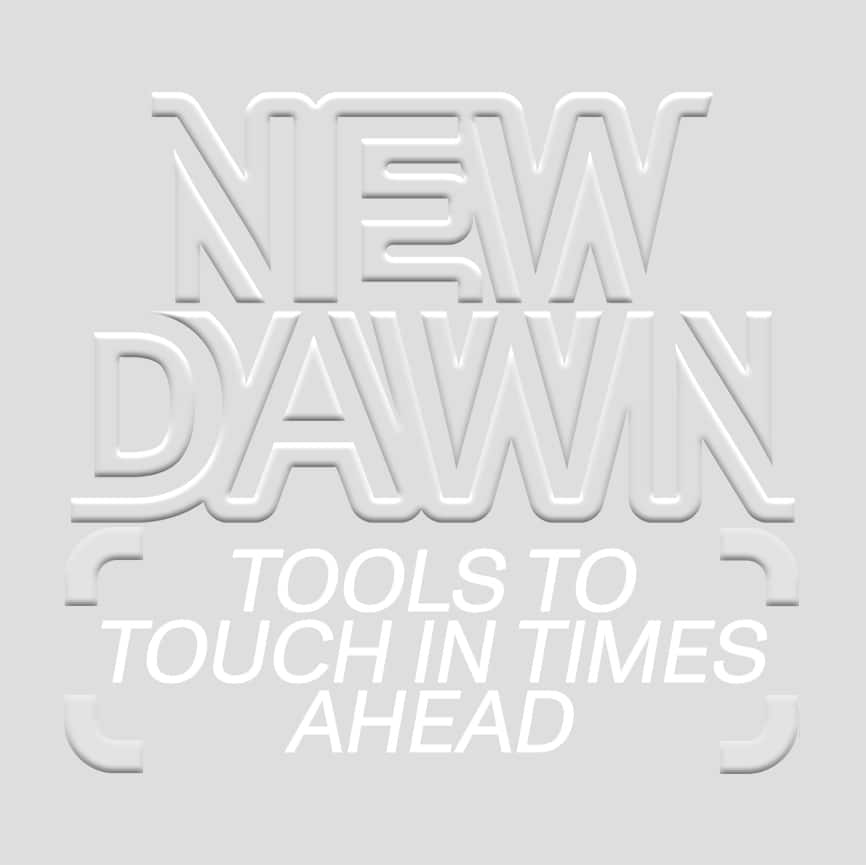 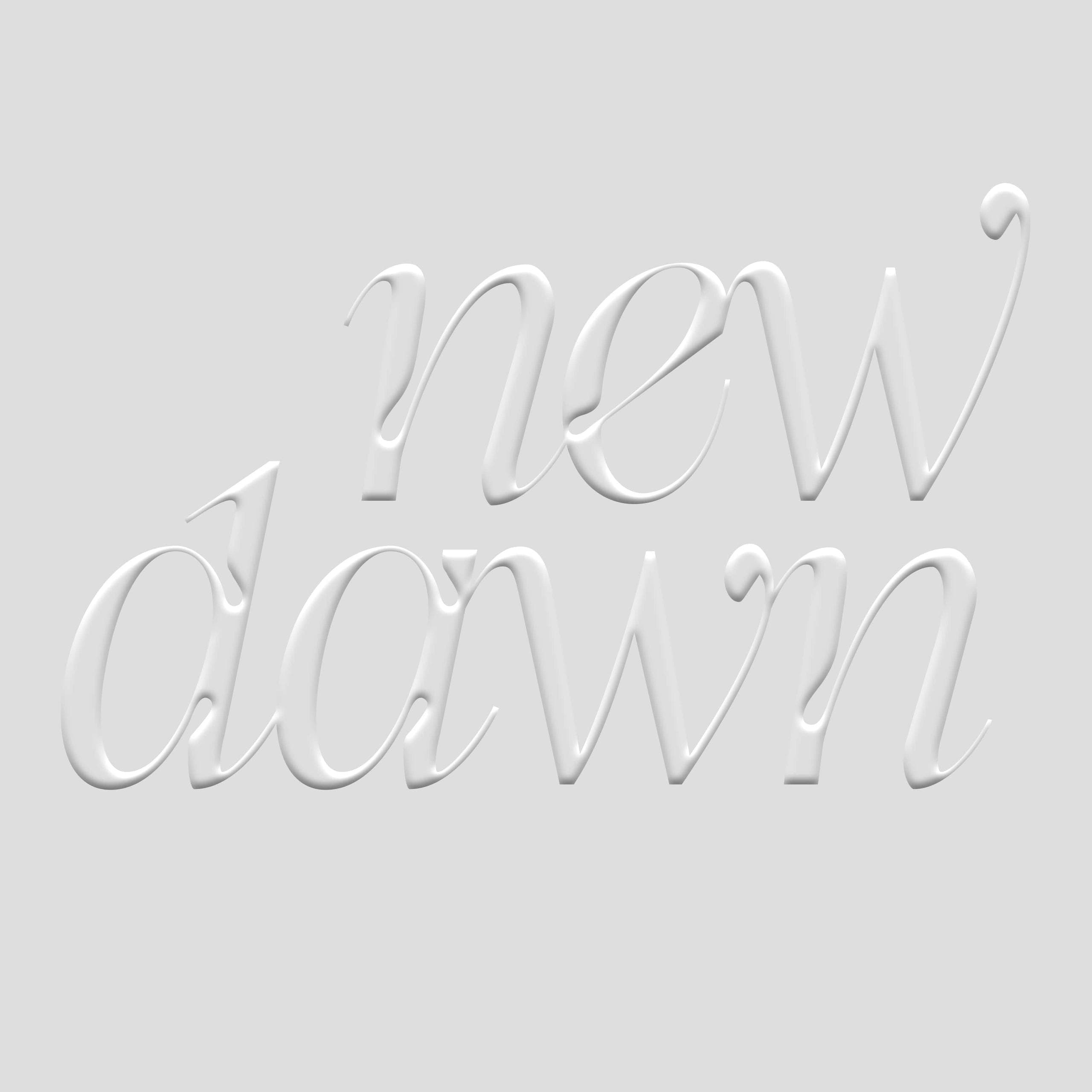 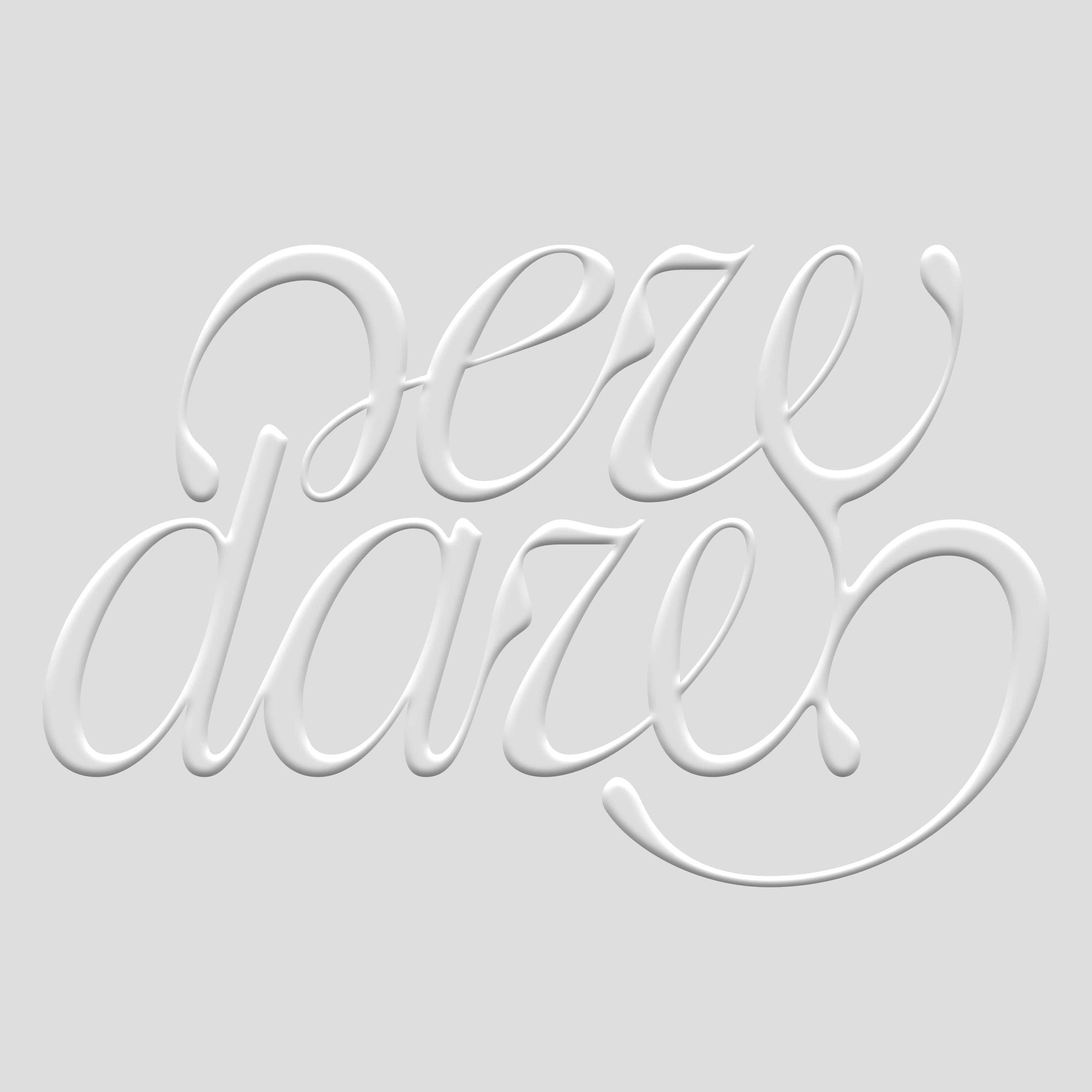 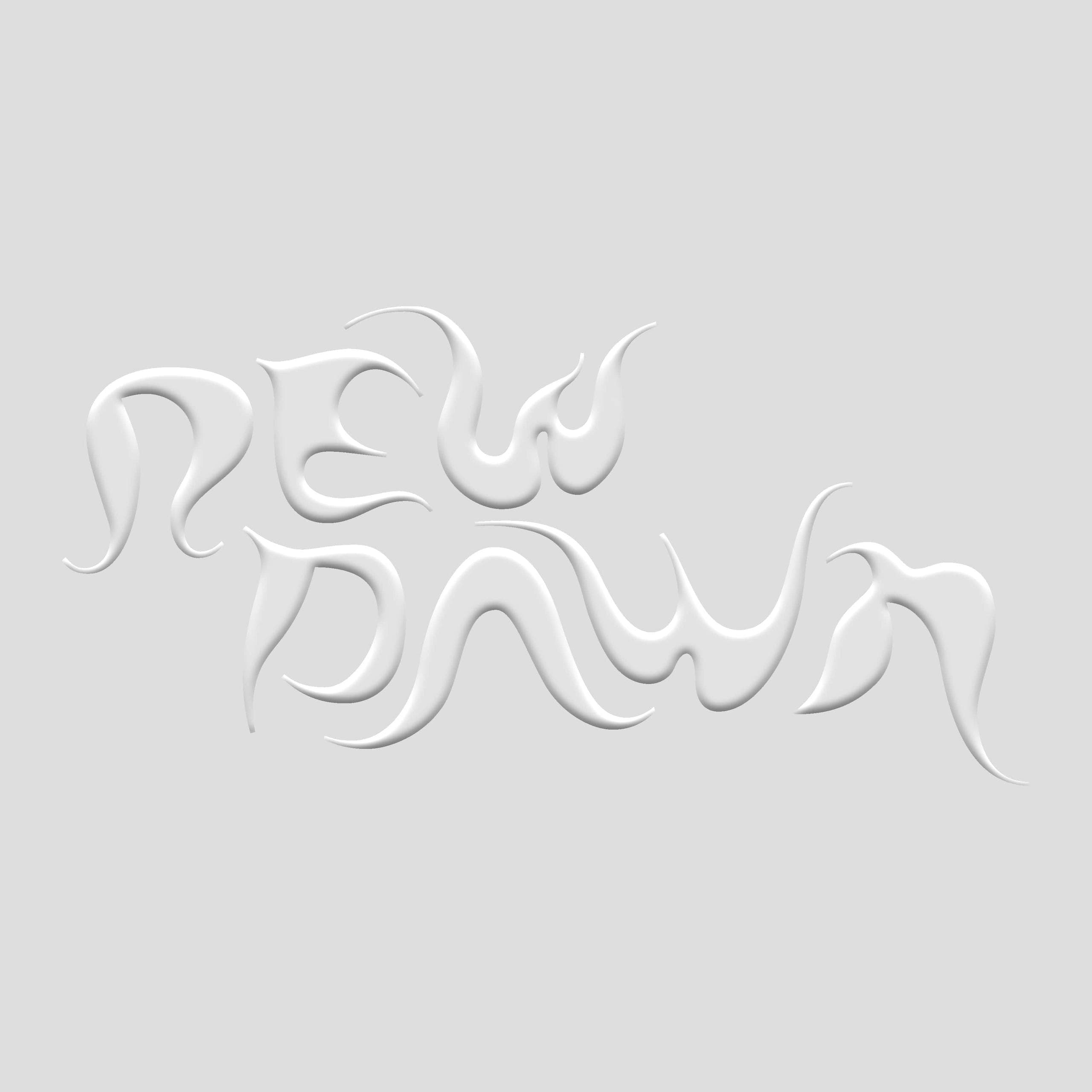 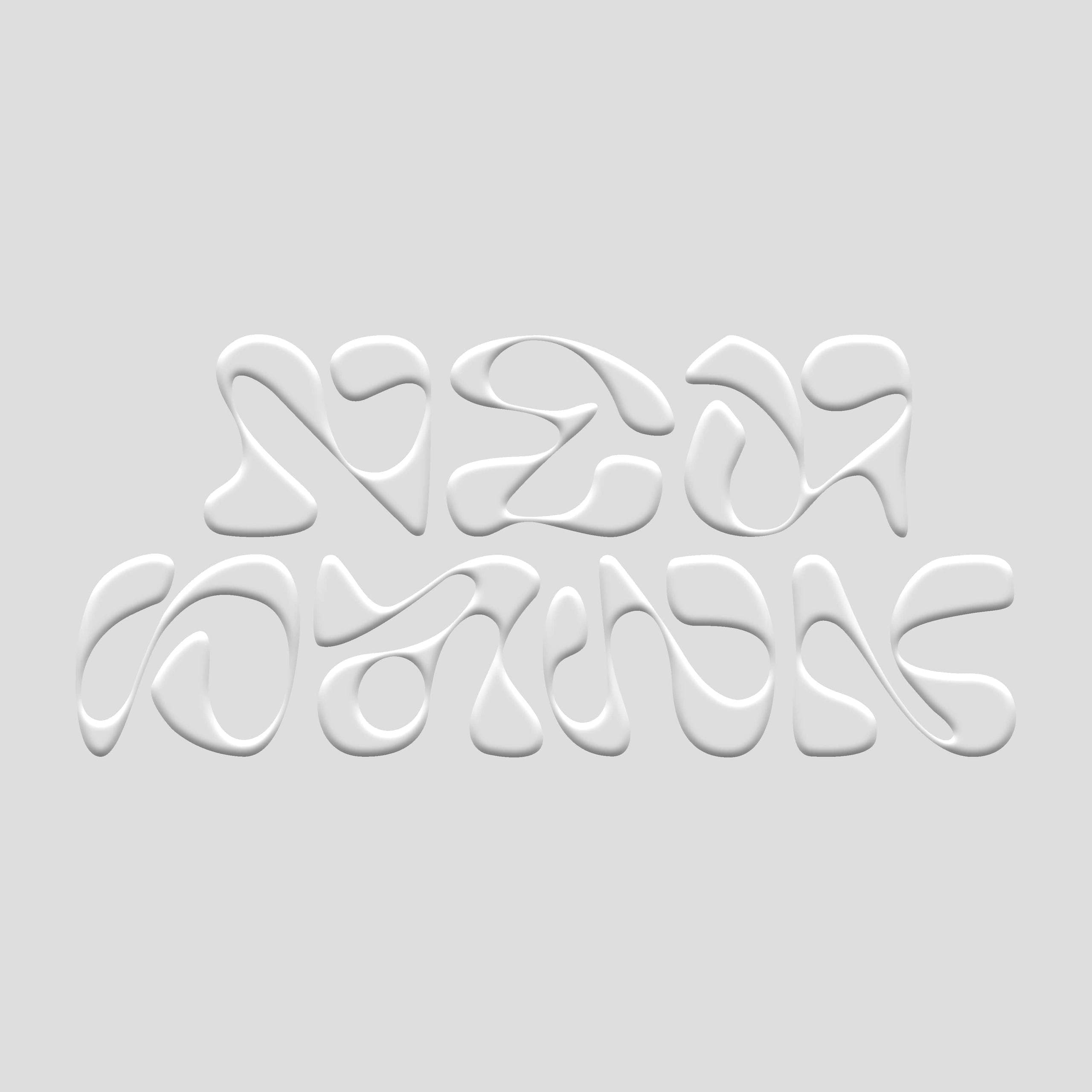 Sascha Bente’s Utopiensum is a typeface made for NEW DAWN based on Thomas More’s original drawings for Utopia. It is complemented and post-produced with a virtual component to its formal language to expand NEW DAWN’s visual and speculative aesthetics. The symbolic inscription is presented as an installation in the virtual exhibition, translating Felipe Duque’s text Sentient Objects.

Challenging narrowly anthropocentric narratives, NEW DAWN | Tool to touch in Times Ahead, sees physical and virtual materials not as inert human possessions but instead as actants, with particular frequencies, energies, potential and aura to affect real and virtual worlds. Any object has the potential to acquire a sentient faculty that allows not only their use but also a sphere of interaction and autonomy. Echoing envisions of a future in which aesthetics is a conjunction between organic and synthetic realms, the exhibition offers a visual narrative that triggers critical awareness of how objects, nonhumans, and other forms of animate and inanimate matter are raced, gendered, classed and sexualized by productively redirecting conversations about biopolitics away from human-centric topics. Matter—both in real or virtual realms—does not function as a passive channel for human action, affects, and desire; instead, it acts, constructs, reshapes, choreographs, and obstructs the audience with whom it interacts. The materiality and presence of a garment or an artwork carries a charge or pulse that radiates energy into those (things) in proximity. The current brought forth by matter transforms—visibly, tangibly, or imperceptibly—the sociocultural, economic, ecological, and performative and exhibit conditions in which it takes part.

In order to resist and overcome binaries such as human/nonhuman, real/virtual, sociality/materiality and utopia/dystopia, NEW DAWN | Tool to touch in Times Ahead focuses on the ontology of things: what they are, how they happen, where they go, and who and what they impact in relational ways. In foregrounding the agency of nonhuman entities we are challenging the way exhibitions and performances approach the literal and material structures that support the spaces to be taken and the spectators to be enacted.

The philosophy, as practiced by Dr. Swantje Martach in and around NEW DAWN , wallows in the richness of deeply and truly Zeitgeist-corresponding speculative narrations that this project realizes. It considers NEW DAWN as an artistic strengthening for, and wishes to boost NEW DAWN by growing its connection to the theoretical database of the speculative philosophical sector, that until recently was happening merely in the canonical margins, but the voice of which is becoming louder in these ecological, viral, cosmological, aquarian times. For so doing, it immerses itself in, and allows itself to be overrun by such issues as a shift from glove-thing to gloving, its residence between fashion and fetishism, its queering of the touching/touched binary, and its realist reconsideration of the aesthetic. Read the article